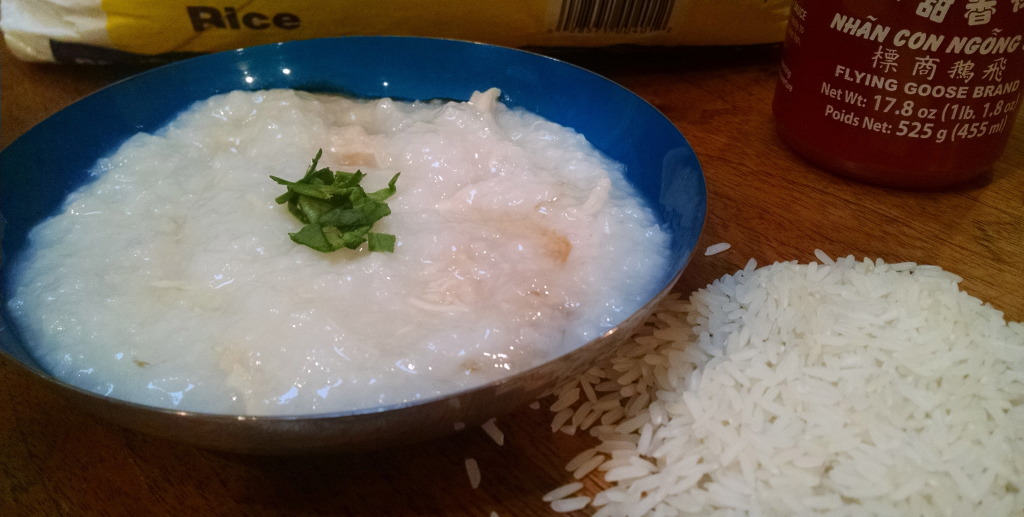 I recently traveled to San Francisco and after exhausting the options of eggs, pancakes and sausage in the “all you can eat breakfast buffet,”  I stumbled past a large black kettle brewing  with a creamy porridge, with side accompaniments including soy sauce, hot sauce and green onions.  My first instinct was that the meal was of Asian origin, and from looking around the restaurant, I noticed that takers of the porridge were indeed Asian. Curious, I tried a bowl and have been hooked on congee since.

Congee is a slow-cooked rice soup of Asian origin, where the ratio of water to rice is far greater than a traditional rice recipe.  By cooking the soup for hours in a large amount of water, the rice breaks downs into a soft, starchy and hearty porridge with the bare remnants of the rice grain.  It becomes a blank palette for adding spices, seafood, meats, and vegetables.  I have experimented with several ingredients and have found find that chicken and ginger are winning combinations, topped with sriracha and soy sauce.

The rice soup itself is a substantive meal, especially if one is “under the weather” or recovering from a stomach bug, for example.  Easy to start a pot in the morning, by midday, a delicious meal is waiting.  There are many ways to cook congee, including on the stove top, in a crock pot or rice cooker, but I have found that the stove top method is simple and efficient.  What’s best is that it can be a satisfying and low-cost vegan, vegetarian, lactose free and/or gluten-free meal!  It is also a very complementary side dish.

Ok, well technically, congee is not known as part of a traditional “Mediterranean diet,” but it has all the characteristics and ingredients that I love about food and cooking. Congee is healthful, satisfying and super easy to prepare, and can become a versatile, staple meal. 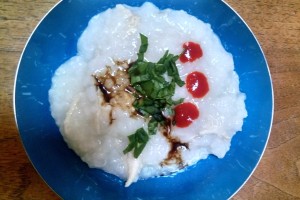