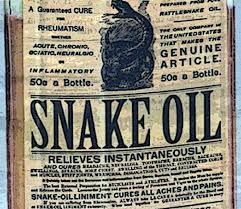 The Composition and Claims of Snake Oil Varied Among its Manufacturers

Throughout history, it has often been difficult to sort out fact from fiction when it comes to health-based claims.  It is especially challenging on the internet, where valid information is published alongside less substantiated information. In my last blog, I wrote about the importance of asking questions and evaluating the sources of internet claims. Here are some common internet topics that may warrant some additional data to support their claims.

“Coconut oil is a miracle oil”

Exclusively cooking with coconut oil and consuming it as a supplement are practices which deserve some caution.  The claims that coconut oil speeds metabolism, aids immunity,  cures diabetes are misleading and lack reproducible data. Sure, some coconut oil may be fine, but consuming it as a super food or as an adding it in one’s daily coffee for its health benefits is not substantiated at this time.  More studies are needed to understand the effects of long-term consumption of coconut oil and claims regarding the value of medium chain trigycerides. (MCTs)

What we know:  Coconut oil is a saturated fat, just like butter.  It is a solid at room temperature. The American Heart Association recommends that no more than 7% of total daily calories, or 140 calories per day in a 2000 calorie diet, come from saturated fats.  That is no more than approximately 1 tablespoon of coconut oil per day.  Saturated fats are shown to raise our ” bad” (LDL) cholesterol.  Better choices include polyunsaturated fats such as canola oil and monounsaturated fats, such as olive oil.

Many internet claims state that we should be not eating gluten and advertise it as “healthy” simply because it is gluten-free.  Gluten is the cited as the cause of belly fat and dementia, for example.

What we know: In people with true Celiac disease, gluten needs to be eliminated. In non-celiac gluten sensitivity, in which symptoms are more subjective, gluten may not be advised and its consumption needs to be discussed with a physician.   For most people without true Celiac disease,  eliminating gluten all together may be overkill.  A balanced diet containing whole grains, ancient grains including wheat-containing farro and less processed grains, are part of a Mediterranean diet which is recommended to optimize wellness. It is important to note that many gluten-free foods are highly processed and contain large quantities of sugar, saturated and trans fats, and salt.

Perhaps intuition tells us that we should stick with organic foods.  However, we do not have all the data at this point to make this generalized assumption which has dramatic ramifications for our shopping, consuming and spending patterns.

What we do know: Some foods are more notoriously “contaminated” than others.  The Dirty Dozen is a list compiled by the Environmental Working Group, (EWG) which ranks the foods with the highest residual pesticide concentrations. The Clean Fifteen by the same group is a list of produce least likely to have pesticide residuals.

“If its Greek, its better”

All Greek yogurt is not created equally and some varieties can contain high amounts of sugar and offer a spectrum of nutritional value.   Look for yogurts with active cultures that are low in sugars.  Some servings of Greek yogurts contain an entire day’s recommended allowance of sugar. This can be detrimental in those with diabetes, pre-diabetes, insulin resistance and metabolic syndrome. The World Health Organizations (WHO) recommends lowering sugar intake to 5% of total energy intake, or approximately 24 grams for the average women and 30 grams for the average man.

What we do know: Greek yogurt has protein, calcium, vitamins and a satisfying creamy texture. Read the label to identify its nutritional contents and add fresh or dried fruits and nuts to unsweetened or plain Greek yogurt for a better option.

“There are magic weight loss foods”

What we know: A Mediterranean diet, active lifestyle and home-cooking regimen can help be a part of a long-term weight loss program.  The lifestyle and diet are not restricted by low caloric or low fat intake,  but rather offer a nutrient-rich variety of foods which have been shown to reduce central obesity and help prevent chronic disease as well.

Inheritently, people want to believe information that will lead them to a better, over-all health state.  With regard to food and supplements,  it is difficult to discern fact from fiction, but starting to ask critical questions will help an educated consumer be a healthier individual.